One of Our Thursdays is Missing 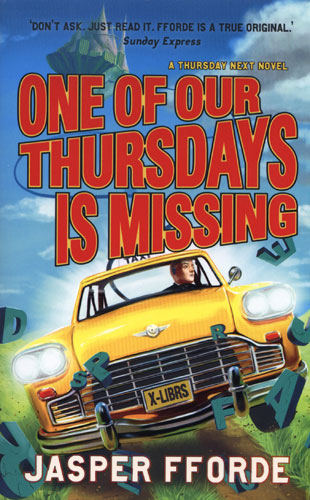 It is a time of unrest in the BookWorld. Only the diplomatic skills of ace literary detective Thursday Next can avert a devastating genre war. But a week before the peace talks, Thursday vanishes. Has she simply returned home to the RealWorld or is this something more sinister? All is not yet lost. Living at the quiet end of speculative fiction is the written Thursday Next, eager to prove herself worth of her illustrious namesake. The written Thursday is soon hot on the trail of her factual alter-ego, and quickly stumbles upon a plot so fiendish that it threatens the very BookWorld itself.

The sixth book in Jasper Fforde's Thursday Next series is the best yet and proves once again that he has one of the top imaginations and sharpest minds of the current generation of authors. This time, Thursday is missing, and the novel is told from the perspective of her literary counterpart in the bookworld, the written Thursday Next - it might be worth having read the first five books to fully understand.

This makes for a fantastic change, as although she is the same character she's also very different and suffers from a number of flaws that she's all too aware of, including being far too nice to take the place of the real Thursday. It also allows for an influx of new bookworld characters to assist her, including a robotic butler with an emotional eyebrow, and Mrs Malaprop, whose words I found initially got in the way of the narrative's flow but soon became one of the top pieces of comedy.

The best thing about a Fforde book is that it makes you think. So many things in novels are so absurd that we never notice, and he uses this meta-fictional point of view to point out some of these and come up with surprisingly rational explanations. It's a really detailed and surprising world that he's invented and the remaining in this book makes it even better for the character to explore.

The story is really a mystery, and being in the bookworld everything is a clue no matter how obscure it seems. Definitely one that will require a re-read to pick up more about what's going on. Another smashing read from an author who is one of my favourites.