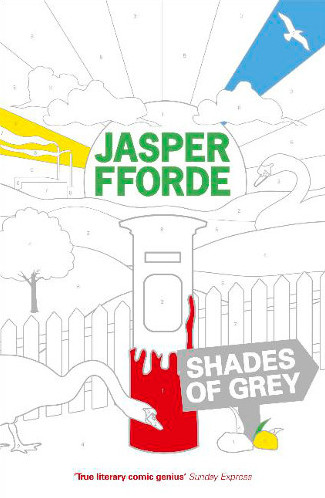 Eddie Russett lives comfortably in a world where fortune, career and ultimate destiny are rigidly dictated by the colours you can see. Until he falls in love with a Grey named Jane, and starts to question every aspect of the Rulebook.

I honestly can't think what to say about Shades of Grey. It's a fantastic book - deeper and much more cerebral than I had been expecting. I had thought it would be something more of a comedy romp, a little more like Fforde's previous Thursday Next and Nursery Crime series. Instead it's a modern masterpiece that I really hope becomes this half-century's equivalent to 1984.

The story is set in a post-apocalyptic world some 700 years in the future, so long after the 'Something that Happened' that no one can remember what made the world this way. Your social status is decided by colour - not of your skin, but how much, and which colour you can see. The Purples at the top of the pile down to the Reds at the bottom, and the Grey slave class that sit below the lot. Lives are lived by a set of arcane rules that no one understand, but everyone follows religiously. Until Eddie Russet has an idea to improve the efficiency of the lunch queue and his life changes beyond recognition.

It's quite frustrating in a way, as we see the world through Eddie's eyes (red) and so only learn things which he sees it fit to tell us. Usually that is not stuff about the world, as it is written 'in universe', so the narration assumes you know how the world is. As such there are lots of things you don't discover until it becomes relevant to the plot. On the other hand though this is a genius method for making want to keep turning pages to find out more, and it enables surprise to follow surprise. There are things that seem so obvious now that it seems unbelievable that I didn't see them coming.

Fforde has definitely surpassed his previous work with this one. Deep and meaningful while full of satire and humour, it's the most thought provoking novel I've read for a long time if ever. I can only hope that its sequels live up to its legacy.