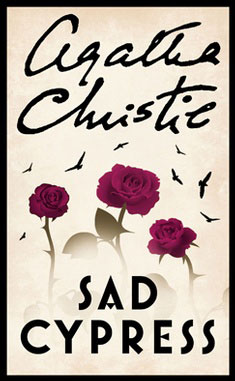 Beautiful young Elinor Carlisle stood serenely in the dock, accused of the murder of Mary Gerrard, her rival in love. The evidence was damning: only Elinor had the motive, the opportunity and the means to administer the fatal poison. Yet, inside the hostile courtroom, only one man still presumed Elinor was innocent until proven guilty: Hercule Poirot was all that stood between Elinor and the gallows.

In 'Sad Cypress' Hercule Poirot is hired on behalf of an accused murderer in an attempt to get her off the charges, despite all the evidence saying that she's guilty.

I found it quite a quick read, and enjoyable, though I'm afraid I didn't spot the solution before it was unveiled for me. The set of characters are the usual, but the country house setting , although present, is at least utilised slightly differently.

The characters are a good, rounded set and it's nice to see a lot of the story from one of their point-of-view rather than coming in with Poirot or Hastings (who is absent from this story). This allowed Christie to blend genres a bit and add a little romance to the story.