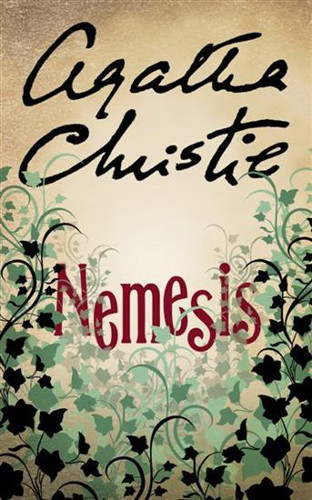 In utter disbelief Miss Marple read the letter addressed to her from the recently deceased Mr Rafiel -- an acquaintance she had met briefly on her travels. Recognising in Miss Marple a natural flair for justice, Mr Rafiel had left instructions for her to investigate a crime after his death. The only problem was, he had failed to tell her who was involved or where and when the crime had been committed.

In some ways, not the greatest of Christie's Marple novels, but in other ways it is. The plot idea is novel, unlike the early Marples which are quite formally structured. In Nemesis Miss Marple is lead through a series of clues before she even finds out what murder she is investigating.

This certainly has the feel of a final novel, and it was the last Marple book Christie wrote (although Sleeping Murder was deliberately published later). It is set out as Marple's greatest ever challenge, and mentions things from a number of the previous books in the series. It also leaves Miss Marple to a happy retirement at the end.

Bonus points to me, because this was the first time that I've managed to solve the mystery before Miss Marple, even though I was put off at one point when the character made a mistake. I would hope that's down to an improvement in my skills rather than a loss in Christie's writing.

Overall, I enjoyed it, and that's what mattered. I'm glad I'm nearly finished with the series though.