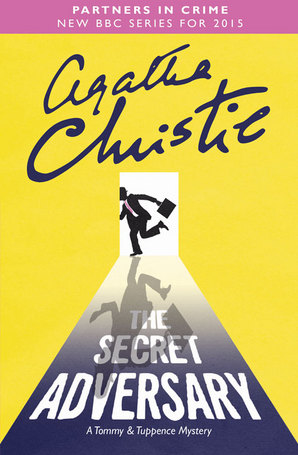 Their advertisement says they are 'willing to do anything, go anywhere'. But their first assignment, for the sinister Mr Whittington, plunges them into more danger than they ever imagined.

I picked up this first novel in Agatha Christie's Tommy and Tuppence series much earlier than I'd planned - partly inspired by the recent TV series (despite not having watched it), but mainly because we agreed for it to be the first book we read in our small new book club.

The story opens with quite formal language, which was a little surprising, as we meet the characters and they dive into some exposition to introduce themselves. Abruptly switching tack, they become the best of friends and set out on an adventure.

The writing style reminded me a lot of Wodehouse, and the narrative is particularly dialogue driven - much of the action being summed up in flashback from one character to another. There are a lot of light-hearted moments, and it was certainly an enjoyable tale.

Of the main characters, Tuppence is well defined from the start, but Tommy seemed quite bland and generic until about halfway through where he is described by another character - and from that moment on he seems to obtain that persona. The other characters are varied, and a few are explored well while others feel like wallpaper.

The adventure itself is as convoluted as one would expect from Christie, and while there is one big give away moment, the reader needs to carefully follow the twisting plot and drip-fed clues to work out what's really going on. All the necessary information is there - but still Christie managed to catch me out.