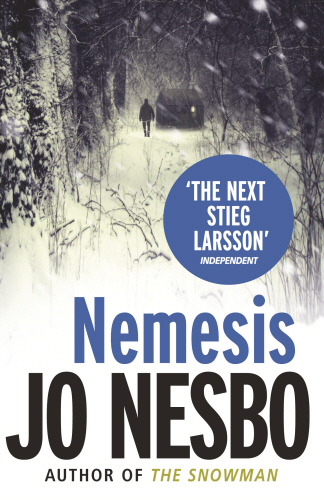 While Harry's girlfriend is away in Russia, an old flame gets in touch. He goes to dinner at her house and wakes up at home with no memory of the past twelve hours. The same morning the girl is found shot dead in her bed. Then Harry begins to receive threatening e-mails. Is someone trying to frame him for this unexplained death?

Jo Nesbo's Nemesis is a strange book, possibly stranger even that his previous work. After a meticulously planned bank robbery ends with the death of a cashier, Inspector Harry Hole is called in to investigate, but it's not his only case. An old flame has turned up dead and Harry can't remember where he was at the time of death - only that he met her earlier in the evening.

The plot is surprisingly bitty and doesn't seem to have much of a flow to it. Every time that it seems the investigation is moving forward it's twisted round on itself, to the point where I lost track of which elements were true and which had been red herrings. There were also some very puzzling mixed metaphors that really broke into the narrative.

The book does have its plus points though - Harry Hole is still a likeable detective despite his odd habits, and the sub-plot that continues from the earlier novel serves to keep the novel moving and maintain the reader's interest, even though it adds a further level of confusion.

My reading has confirmed that Jo Nesbo is not the next Stieg Larsson, regardless of what it says on the cover, and his tendency, particularly in the early chapters, to mislead the reader in a scene is quite frustrating. At the halfway point I thought I had tired of Hole, and would be happy to abandon him after this book, but as before the second half pulled me back in and now I feel compelled to continue, if only to find out how the continuing storyline pans out.