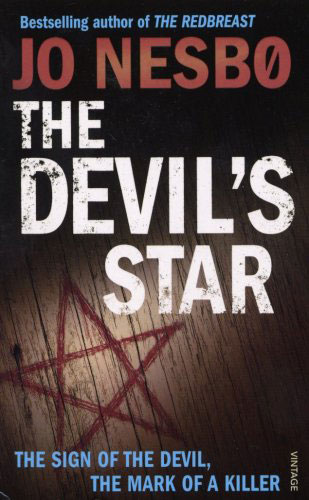 A young woman is murdered in her flat and a tiny red diamond in the shape of a five-pointed star is found behind her eyelid. Detective Harry Hole is assigned to the case, alongside his long-time adversary Tom Waaler and initially wants no part in it.

But Harry is already his final warning and has little alternative but to drag himself out of his alcoholic stupor when it becomes apparent that Oslo has a serial killer on its hands.

The Devil's Star is the fifth of Jo Nesbo's Harry Hole books (but confusingly the first published in English and the third in the 'Prince' trilogy). It's the third of the series that I've read (after The Redbreast and Nemesis) and certainly the best of the three.

I recommend reading the three books of this 'trilogy' in order, and would guess that it's best to read the earlier two first, even though I haven't, as Redbreast didn't really introduce the characters all that well.

Although it starts out fairly weakly with a rather stereotypical alcholic loner policeman, it soon picks up with both a plot of its own as Hole and his colleages investigate a serial killer in Oslo, and the continuing plot that carries over from the previous two novels.

The writing is a little confusing in places, and particularly in chapter three I noticed a number of strange sentances, however once I was a few chapters in I was absolutely hooked. I was quite surprised actually by how much I found myself enjoying the story having found the other two books I've read slightly disappointing.

One feature of Nesbo's writing that cropped up a number of times in this book was suddenly introducing new characters - there are quite a lot of them who kick-off a new chapter with a massive chunk of their backstory before merging into the plot and in some cases playing just the tiniest part in the story.

It's certainly saved my opinion of both the writer and his detective, and rather than abandoning the series, as I was suspecting I might, I'm not looking forward to picking up another book in the series.