All Fun and Games Until Somebody Loses an Eye 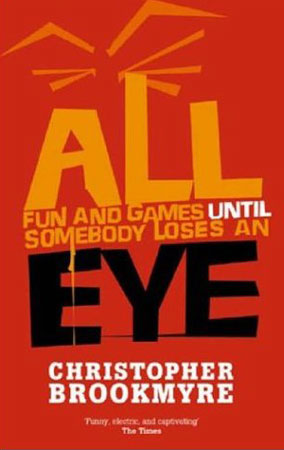 As a teenager Jane Bell had dreamt of playing in the casinos of Monte Carlo in the company of James Bond, but in her punk phase she'd got herself pregnant and by the time she reaches forty-six she's a grandmother. Then her son Ross, a researcher for an arms manufacturer in Switzerland, is forced to disappear before some characters cut from the same cloth as Blofeld persuade him to part with the secrets of his research. The teenage dreams of fast cars, high-tech firepower and extreme action had always promised to be fun and games, but in real life it's likely someone is going to lose an eye.

An absolutely genius novel and possibly Brookmyre's best that I've read. The novel is action packed and full of laughs, and less gruesome/disgusting than some of his earlier stories. When Ross Fleming goes missing, his employer brings in a crack team to track him down before their enemies - and who better for them to recruit than Ross's own mother.

The characters in the book are all well developed and even those who initially appear rather two-dimensional are fleshed out in unexpected ways. Jane herself proves to be an excellent protagonist, and her repeated comparisons to James Bond movies add another amusing element. There is a point where it seems it's fallen into the recent Brookmyre cliché of amateur versus crack professional team, but the twists of the plot take it into new directions.

If I were going to choose a Brookmyre novel to make into a film, this is the one that it would have to be. The plot moves at a good speed and the writing manages to successfully mislead the reader over and over again (the openings of the first few chapters being particularly good examples).

Overall though its best selling point is that it's the funniest book I've read for ages. I really would recommend this to readers who like humorous action and it's only strengthened my resolve to keep reading this author's novels.