The Sacred Art of Stealing 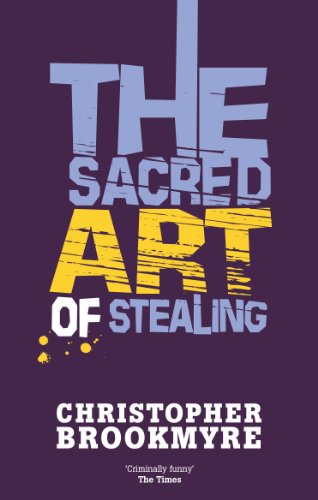 He is an art-thief par excellence and she is a connoisseur of crooks. Her job is to hunt him to extinction; his is to avoid being caught and he also has a secret agenda more valuable than anything he might steal. There are risks he can take without jeopardising his plans. He can afford to play cat-and-mouse with the female cop who's on his tail; it might even arguably be necessary. What he can't afford is to let her get too close: he could could end up in jail or, even more scary, he could end up in love.

Brookmyre's seventh novel is a sequel to 'A Big Boy Did It And Ran Away', although the focus is now on police officer Angelique de Xavier, who was only the lead supporting character in the earlier novel. She's suffering with the consequences of her actions, but is still the person called in when an unusual bank robbery kicks off.

The first thing that should be noted is the liberal spread of strong language, however the use of Scots dialect has been dialled down which makes the prose easier to read than in some of his previous novels.

The plot is captivating and surprisingly believable, with the appealing angle that you end up rooting for someone who is ultimately a baddie. The scale of the plot is certainly on the level of films like 'The Thomas Crowne Affair' with an ingeniously complicated plan by the criminals that doesn't become completely clear until the very end.

There are a couple of chapters which have a strikingly different style, one the very first, which after reading I was a little concerned that I would not enjoy reading the book - fortunately I read on though and got to the good parts which make up by far the majority of the text.

The key to this book though is the relationships between the characters, which are developed exceptionally well and provide the impetus to turn what could have been a run of the mill cops and robbers story into a brilliant read.