A Big Boy Did it and Ran Away 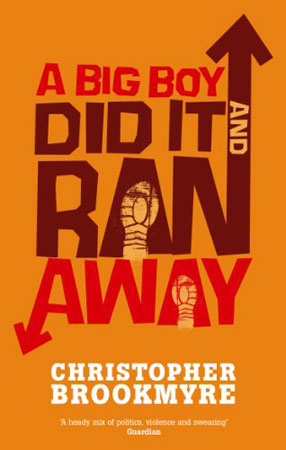 Back when they were students, just like everybody else, Ray Ash and Simon Darcourt had dreams about what they'd do when they grew up. In both their cases, it was to be rock stars. Fifteen years later, their mid-thirties are bearing down fast, and just like everybody else, they're having to accept the less glamorous hands reality has dealt them. Nervous new father Ray takes refuge from his responsibilities by living a virtual existence in online games. People say he needs to grow up, but everybody has to find their own way of coping. For some it's affairs, for others it's the bottle, and for Simon it's serial murder, mass slaughter and professional assassination.

Brookmyre's sixth book tells the story of Ray Ash and Simon Darcourt, two former university friends who find themselves on either side of the law when Ash discovers that Darcourt is now the world's most wanted terrorist.

The first thing to notice is that Brookmyre's style involves a lot of use of the Scots dialect. This didn't pose much of a problem to me but to those less familiar with it may lead to some confusion. Ash is a gamer, and several of his sections of the narrative are presented in style and comparison to computer games like Quake, which is a nice touch.

The style continues that which I have noticed in Brookmyre's previous novels, of using the majority of the book to establish the characters by way of flashback. While the characters are interesting and there are key reveals from their past left until fairly late on, and in places does feel a little frustrating as the actual plot doesn't move forward very fast.

At almost five hundred pages though, this book is about a hundred pages too long. At that point my attention started to drift away from the plot, especially as the flashbacks continued. Otherwise it was a fairly entertaining read, although the violence somewhat overwhelms the comedy.