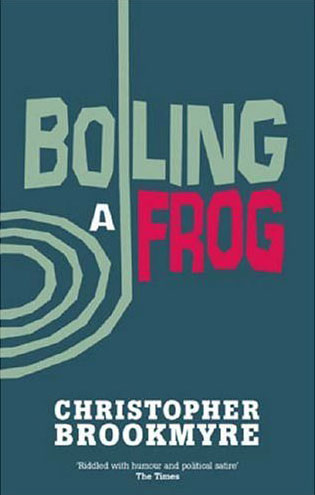 Jack Parlabane, the investigative journalist who is not averse to breaking the law for the sake of a good story, has finally been caught on the petard of his own self-confidence and is experiencing accommodation courtesy of Her Majesty. The fledgling Scottish parliament is in catatonic shock after experiencing its first dose of Westminster sleaze. The Catholic Church of Scotland is taking full advantage of the politicians' discomfort and is riding high in the polls as the voice of morality. Behind the scenes the truth is obscured by the machinations of the spin doctors and in prison, aware he's missing out on a great story, Parlabane discovers that contacts and a pretty way with words are no defence against people he has helped to put away.

Brookmyre's fifth novel sees the return of investigative journalist Jack Parlebane, thrown in jail for breaking and entering. It retains the same Scots dialect, black comedy and gory scenes as the previous novels, but the plot does not come across so well.

Most of the book is told out of chronological order - the main narrative being with Jack in jail, but interspersed with chapters detailing how this came to be and introducing the other elements of the plot. About two-thirds of the way through the whole thing switches back to 'real time' and from there the story flows much better.

The ideas behind the plot are as ludicrously believable and gloriously violent as usual, and the characters who populate Brookmyre's Scotland are well presented and varied. There are reappearances of a number of characters from earlier novels, some expanded in interesting directions and others seemingly there only as deus ex machina.

Overall, I can't say it was up to the usual standard, though certainly things picked up towards the end. I wouldn't recommend it over the other four I've read.