One Fine Day in the Middle of the Night 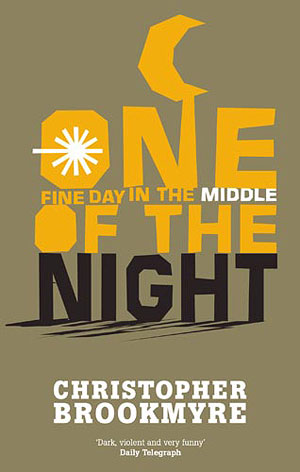 Gavin is creating a unique 'holiday experience', every facility any tourist who hates abroad will ever want, will all be available on a converted North Sea oil rig. To test the facilities he's hosting a reunion for his old school. He is so busy showing off that he doesn't notice that another group have invited themselves along -- a collection of terrorist mercenaries who are occasionally of more danger to themselves than to the public.

The fourth comedy thriller from Christopher Brookmyre tells the story of an ill-fated school-reunion, where old friends reacquaint themselves until some unexpected guests show up - with guns.

The book is addictive reader, and possible Brookmyre's most captivating novel by far. There are a large number of characters, but they are a very believable bunch, all with their own quirks and motivations for attending. The first half of the novel deals with a selection of the attendees, establishing the people they were at school and are now - in fact, this to me was the more interesting half of the book.

The best feature of this book is the timing. Over and over again things suddenly became clear in my mind - I would fall in almost exactly half a page before the characters realised the same thing. This to me makes for perfect plotting - I find it really frustrating when something is so incredibly obvious but the characters are oblivious, and almost as bad when the characters can think something up that wasn't just as clear to the reader. This book however is perfect in this way.

My only criticism is that the second half was not quite as interesting as the first. This was where the action kicked off. I also found the presence of retired police office MacGregor a little strange, as a lot of his scenes seemed as padding just to justify his appearance.

Overall though I really enjoyed this one and am once again looking forward to reading the next Brookmyre. A fantastic read.