Country of the Blind 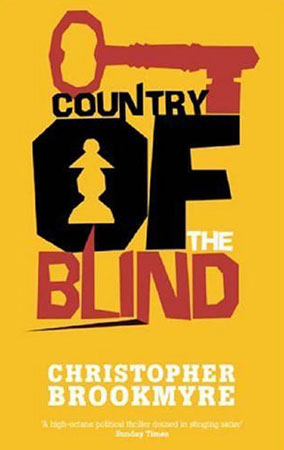 The murder of a media mogul in his country mansion appears to be the result of him disturbing a gang of would-be thieves. The robbers are swiftly caught, but when they are unexpectedly moved to a different prison they escape. Back in Edinburgh, a young solicitor reveals to the press that one of the subjects had left a letter with her some time before the break-in which proves his innocence.

While I did find this novel to be an entertaining read, it seemed a particularly odd one. As a sequel, it made the mandatory references to the previous novel but without going into more detail than was necessary (well, perhaps a little). A nice number of characters had returned, although some had a bigger and some a smaller role than I had expected, and the lives of some had moved off in directions I was not expecting.

This book is less macabre than the previous one, although it has its fair share of violence and killing, just without quite so much disgust induced. The new characters are well introduced and the plot itself sounds worryingly plausible.

The story does seem a little slow to get started though - we see maybe the first third of the book through a sequence of eyes, before jumping into those of the 'suspects' for much of the second third, and it is they who explain the back story, and it is only then that the reader begins to understand what has been happening. It's a little awkward to read because for quite a long time you are left in the dark and confused, until all is revealed to you, long before the characters themselves twig.

The book picks up towards the end, I found, with the action ramping up, the plot making sense, and the characters actually doing something pro-active. It's a good read though, and although I had some early doubts I'll definitely be returned to Brookmyre's world.