Quite Ugly One Morning 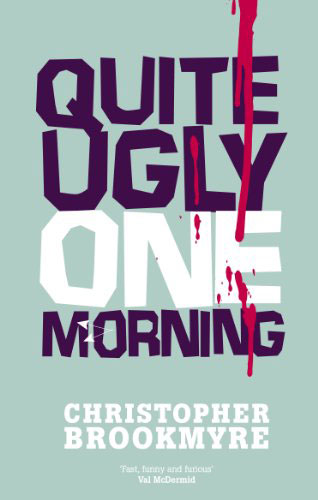 Yeah, yeah, the usual. A crime. A corpse. A killer. Heard it. Except this stiff happens to be a Ponsonby, scion of a venerable Edinburgh medical clan, and the manner of his death speaks of unspeakable things. Why is the body displayed like a slice of beef? How come his hands are digitally challenged? And if it's not the corpse, what is that awful smell?

Jack Parlabane is something of a para-journalist... whose skills seem more akin to a burglar or spy, and who does very little journalism throughout. When his new neighbour's corpse is found in rather unusual circumstances he teams up with the ex-wife of the deceased and a local police officer to investigate.

The story is fast moving, with new discoveries coming thick and fast, and unlike the majority of detective novels the reader is let in on who the baddies are and some of their plans fairly early on - and although in other books this has been a quite torturous approach as the investigation stumbles around, here it works. The scenes jump from character to character very quickly in a style very different from what I am used to reading, which causes a little confusion as you get re-oriented at the beginning of each chapter. Indeed, it was some time before I fell in to who was going to be the main character.

The book is a little crude. Okay, very crude. Not in terms of the writing but in terms of the amount of blood, excrement and otherwise detailed descriptions of comedy gore. It's certainly not horror, but black humour might be a better choice of label. It's generally not laugh out loud funny, but it's certainly not subtle - it is his first novel that I have read though, so it will be interesting to see how it develops.

It was in all an enjoyable quick read, though the characters are not incredibly deep and the whole romp is slightly less than believable - particularly some of the misfortune that befalls the bad guys. I'll stick with Brookmyre for book two.