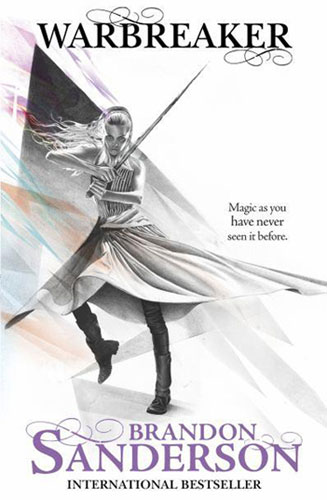 Warbreaker is the story of two sisters, who happen to be princesses, the God King one of them has to marry, a lesser god, and an immortal trying to undo the mistakes he made hundreds of years ago.

Theirs is a world in which those who die in glory return as gods to live confined to a pantheon in Hallandren's capital city. A world transformed by BioChromatic magic, a power based on an essence known as breath. Using magic is arduous: breath can only be collected one unit at a time from individual people.

But the rewards are great: by using breath and drawing upon the color in everyday objects, all manner of miracles and mischief can be performed.

I'm surprised how nervous I get about picking up a Brandon Sanderson book that's not from a series I'm already familiar with (this is, so far, a standalone). I should have learnt by now that all his books are fantastic, and by the end of them I'm always desperate to pick up another as soon as possible.

Warbreaker is no exception. A story about two princesses in a world of magic, who both visit a neighbouring country in a reversal of their previous roles. Sanderson's exploration of these two characters (and a couple of others) really makes this book, and I really enjoyed seeing them explore who they were and find their places in the world.

The world itself is another marvel of Sanderson's imagination - he's constructed yet another of his detailed magic systems and a pair of counterbalanced cultures that have real depth and layers that keep on peeling to reveal more and more. I find it hard to fathom how he has become so great at creating these places and the stories to go with them.

Once again a great read and one that I can easily imagine me returning to re-read in the future. Easily the best thing I've read for ages - to the extent that the books I picked up afterwards felt bland and lifeless by comparison.