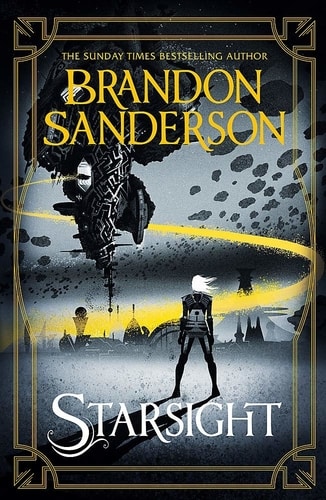 All her life, Spensa has dreamed of becoming a pilot. Of proving she's a hero like her father. She made it to the sky, but the truths she learned about her father were crushing. The rumours of his cowardice are true - he deserted his flight during battle against the Krell. Worse, though, he turned against his team and attacked them.

Spensa is sure there's more to the story. And she's sure that whatever happened to her father in his starship could happen to her. When she made it outside the protective shell of her planet, she heard the stars - and it was terrifying. What she learned turned her world upside down. Everything Spensa's been taught is a lie.

The second novel of Spensa, a woman who has grown up on humanity’s last refuge, and become a pilot to help defend her world. Starlight starts without an obvious direction to go in - the plot of the first novel, while leaving space for the sequel, didn’t make the onward path obvious.

So I was happy to find that Sanderson has found a way to advance the plot, and of course his all-important worldbuilding, without dramatically shifting the tone of the narrative. We’re still aligned with Spensa, exploring an unfamiliar environment, learning so much, and facing an even bigger threat than before.

I didn’t find the novel as captivating as I had expected though. It’s not non-captivating, just not to the level I have come to expect from Sanderson’s novels. There are evident similarities between the style of the narrative here with his previous young adult novels, but it’s clearly grown since Alcatraz into something I can at least engage with without being put off.

What I loved the most about this novel is the worldbuilding - that Sanderson is taking all the little seeds that he planted in the first book and growing them into surprising new directions, that either make you feel a bit dumb for not seeing where it was going, or make you rethink your understanding, or just make you go wow.