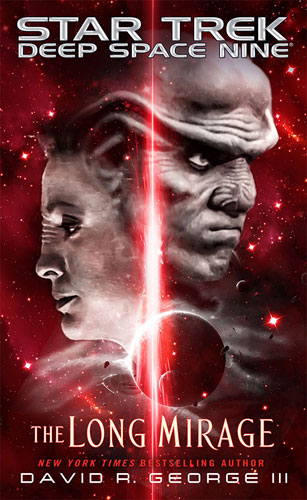 More than two years have passed since the destruction of the original Deep Space 9. In that time, a brand new starbase has replaced it, commanded by Captain Ro Laren, yet still the crew and residents of the former station continue to experience the repercussions of its loss. Quark continues his search for Morn, and Kira Nerys emerges from the wormhole after being caught inside it when it collapsed two years earlier.

Another episode in the ongoing continuation of Deep Space Nine, my favourite of the Star Trek television series, The Long Mirage tells three parallel stories focussing on some of the most interesting characters. Kira Nerys, returning after an interesting trip, and discovering her religion in schism. Ro Laren, exploring relationships and joining the hunt for a missing person. And Nog, trapped in a holosuite (but not quite in the usual cliched way).

It's a fun novel, which is a good thing to fit into the Trek release schedule amid the long trilogies of 2016 and the somewhat darker other publications in the 2017 schedule. It's good to see some of the characters who make the TV series entertaining, as well as some who are new or were secondary before.

The trio of stories helps to make the novel feel like it's moving well, and it's nicely paced to bounce between them at the right intervals. It does feel for the most part though a little as if there are three novellas just intercut, but I don't think that's a problem as it does mirror quite nicely the way some of the episodes are structured.

Another excellent DS9 story from David R George III, and one that continues to keep me waiting desperately for the next book to learn how the adventures continue.