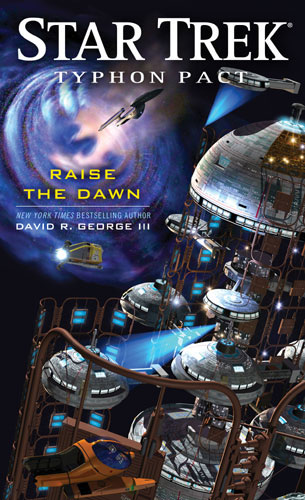 After the disastrous events in the Bajoran system, Captain Benjamin Sisko must confront the consequences of the recent choices he has made in his life. At the same time, the United Federation of Planets and its Khitomer Accords allies have come to the brink of war with the Typhon Pact. While factions within the Pact unsuccessfully used the recent gestures of goodwill-the opening of borders and a joint Federation-Romulan exploratory mission-to develop quantum-slipstream drive, they have not given up their goals.

Raise the Dawn is the second half of a duology, and the seventh entry in the Typhon Pact thread of Star Trek fiction. It focusses mostly on characters from Deep Space Nine as they deal with the repercussions of the events of Plagues of Night.

I'm aware that a number of Trek fans don't like David R George III's writing style, which makes this book read more of an epic tale than a close, character development piece, but I enjoy the tales he tells in this pair of books and found there to be plenty of character moments along with the action and politics.

This feels like it's a summation of all the Typhon Pact books so far, but it's far from the end of the thread (there's one more coming later this year at least), but it brings a number of ongoing plot points to a conclusion.

I've very much enjoyed this couple of novels and looks forward to more from George.