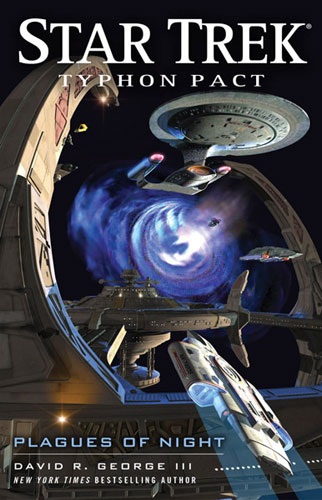 In the wake of the Borg invasion, six nations adversarial to the United Federation of Planets join ranks to form the Typhon Pact. Through 2381, 2382, and 2383, the Federation and the Klingon Empire, allied under the Khitomer Accords, contend with the nascent coalition on a predominantly cold-war footing. But as Starfleet rebuilds itself, some of the Pact states grow restive, concerned about their own inability to develop a quantum slipstream drive to match that of the Federation. Will the cold war between the two alliances deepen, perhaps even lead to a shooting war, or will peace-minded leaders like UFP President Bacco and RSE Praetor Kamemor bring about detente?

David R George III continues the post-Nemesis Star Trek saga in this first part of a duology and sixth part in the ongoing Typhon Pact arc. The narrative covers the period around the earlier novels, adding some context to tie them together, then continues the adventures of the Next Gen and Deep Space Nine characters as the Federation opens diplomatic relations with the Typhon Pact.

In common with George's other Trek novels, the focus is quite broad and the book longer than many recent entries in the series, meaning that the text in my paperback copy is smaller than is often the case. Rather than following an individual character, George's narrative flits around taking in the diverse lives of Picard, Kira, Bashir etc, while focusing mainly on Sisko and surprisingly Ro Laren, as well as a number of the new characters introduced in the novels.

Some readers will find the book frustrating in the way the story is told from myriad points of view. I know a number of Star Trek fans are not enamoured of George's style, but I like it - it certainly isn't a character piece, but the breadth of the tale doesn't weaken the storytelling and certainly makes for an epic tale.

I've really enjoyed catching up with the Deep Space Nine characters again and am really looking forward to the continuation of this story in Raise the Dawn.