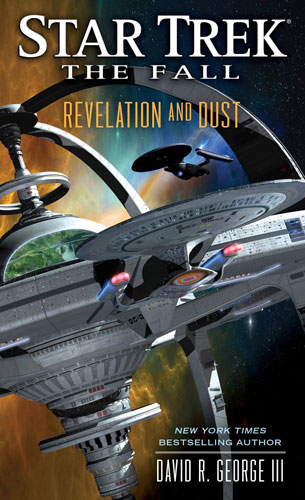 As familiar faces arrive at DS9, Captain Ro Laren will host various heads of state to an impressive dedication ceremony. The dignitaries include not only the leaders of allies but also those of rival powers, such as the Romulan praetor and the Gorn imperator. But as Ro's crew prepares to open DS9 to the entire Bajor Sector and beyond, disaster looms. A faction has already set in action a shocking plan that, if successful, will shake the Alpha and Beta Quadrants to the core.

Book one of The Fall, this year's 24th Century Star Trek novel extravaganza is also a celebration of 20 years since Deep Space Nine first aired, and that's where the series starts, picking up after the dramatic events of David R George III's previous three DS9 novels.

And the drama keeps on coming as we follow two main threads of story and are given tiny glimpses of storylines being lined up for the future. George gives away pretty quickly that something big is coming, and from then every chapter in that thread is written with glorious tension that this could be it. I loved this.

George gets a lot of stick for being overly wordy, but I've never found this a problem with his writing, and like a chunky Trek book that's richer than just action. There was one point in a long section near the beginning of the book where I wondered where the narrative was going, but it became clear in the end.

The characters are marvellous, and I'm surprised by how many the author managed to get to. He has their voices - particularly the Ferengi - down perfectly and I could really hear the actors in my head, something that few Trek books actually manage to achieve.

I loved this book, and am really looking forward to the remaining four parts of The Fall. If they're as full of character, action and emotion as this one then they'll continue TrekLit's fantastic current run.