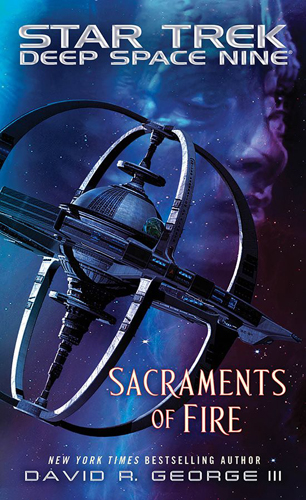 The unexpected appearance of a stranger on DS9 raises serious concerns. He seems dazed and confused, providing - in a peculiar patois of the Bajoran language - unsatisfactory answers. He offers his identity as Altek, of which there is no apparent record, and he claims not to know where he is or how he got there. A quick scan confirms the visitor is armed with a projectile weapon. But the Bajoran liaison to the station believes that Altek has been sent from the Prophets, out of a nearby wormhole. The last time such an event occurred, it was to reassure Benjamin Sisko of his place as the Emissary. For what purpose has Altek now been sent out of the Celestial Temple?

The Star Trek litverse returns to Deep Space Nine in a book that runs parallel to the events of the 'The Fall' mini series, as well as some of the stories that followed it. It also begins to fill in the major DS9 continuity gap that was left between the original relaunch novels and the Destiny trilogy.

It's difficult to describe the plot without spilling spoilers all over the shop - but it's a great ride that catches up with a number of characters from the series and truly does them justice. George's writing captures the spirit of DS9 and weaves a fantastic tale from the various threads.

One of the things I like most about George's novels is that they don't make an assumption that you remember everything that has gone before. He's got the balance just right to fill you in with what you need to know without it feeling like a full recap. There are also subtle hints at things from other stories that make you smile if you spot them but don't break your flow if not.

Another great DS9 novel and I hope for many more to come, not least the immediate follow up which is due in the winter.