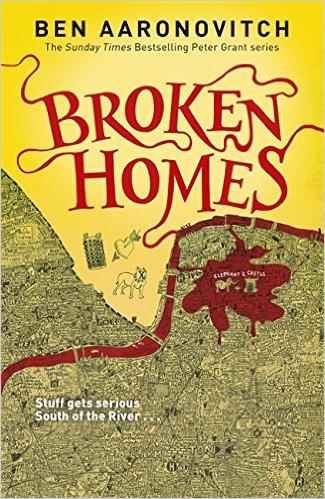 A mutilated body in Crawley. Another killer on the loose. The prime suspect is one Robert Weil - an associate of the twisted magician known as the Faceless Man? Or just a common garden serial killer?

Before PC Peter Grant can get his head round the case, a town planner going under a tube train and a stolen grimoire are adding to his case-load.

But then Peter gets word of something very odd happening in Elephant and Castle, on an housing estate designed by a nutter, built by charlatans and inhabited by the truly desperate.

The fourth book in the Rivers of London series is another thrilling and mysterious adventure for Peter Grant and his colleagues at The Folly, headquarters of the Metropolitan Police's only wizard division.

There's a lot that serves as confrontation of the series' ongoing plot and I don't think this one really works as a stand-alone without the knowledge of what has gone before. For those who are following the story it offers a lot, including some titbits of background and some major developments.

One of the aspects that I like best about this series is the simplicity of the magic system compared with the rich detail of the London setting. Aaronovitch demonstrates an endless knowledge of the capital and it's diverse cultural heritage which vastly increased the realism and depth of the story.

Quite possibly his best yet, and one which only increases my desire to keep reading.