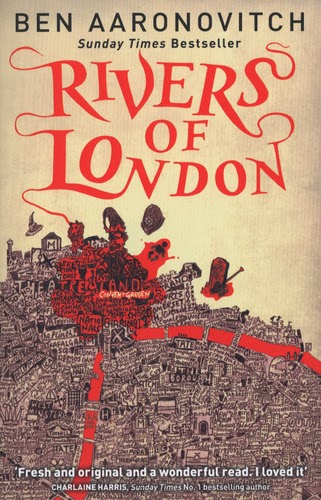 My name is Peter Grant and until January I was just probationary constable in the Metropolitan Police Service. My only concerns in life were how to avoid a transfer to the Case Progression Unit - we do paperwork so real coppers don't have to - and finding a way to climb into the panties of the outrageously perky WPC Leslie May. Then one night, in pursuance of a murder inquiry, I tried to take a witness statement from someone who was dead but disturbingly voluable, and that brought me to the attention of Inspector Nightingale, the last wizard in England.

The first book of a new series and new author for me, following a young police constable, fresh out of training and on the beat as part of the Metropolitan Police where he is rapidly seconded into an unusual unit that deals with investigating the odd. It didn't strike me as a particularly new idea - the urban fantasy setting is similar to several series that I've read before, and even tying that to the idea of an investigator is familiar (e.g.Jim Butcher's Dresden Files, Christopher Fowler's Bryant & May).

That said, this book did immediately capture my attention with its humour and character. Peter Grant, the main character and narrator, is an engaging chap and is believable as a character to align the audience with as he is introduced to the magical world - in a way very much like Harry Potter, where the reader learns with the character. Similarly, there's clearly a lot going on that we're not, as readers, let in on at this stage in the narrative and I'm looking forward to following the story on in the sequels.

The plot itself is interesting, although there were perhaps a few too many strands of narrative to pull together. There are some nice twists and turns and reveals along the way that really do well to keep the reader interested. That said, there are elements that I thought were obvious surprisingly early on but the characters didn't pick up on until later.

Genuinely one of the best comedic urban fantasies that I've read and one that's high up on my favourite books read in 2014.