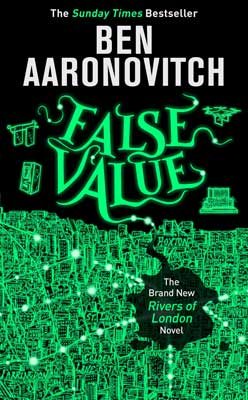 Peter Grant is facing fatherhood, and an uncertain future, with equal amounts of panic and enthusiasm. Leaving his old police life behind, he takes a job with Silicon Valley tech genius Terrence Skinner's new London start up: the Serious Cybernetics Corporation. Drawn into the orbit of Old Street's famous 'silicon roundabout', Peter must learn how to blend in with people who are both civilians and geekier than he is. Compared to his last job, Peter thinks it should be a doddle. But magic is not finished with the Met's first trainee wizard in fifty years.

The eight full-length novel in the Peter Grant / Rivers of London series is happily back in the territory of the stand-alone adventure, after the previous novel’s slightly confusing attempt to wrap up some ongoing plot threads. We meet Peter, recently having left the police, as he begins a new job as a security guard for a high tech business in London.

I mean, it’s great. The plot takes some real world elements and adds some magical twists, the character’s lives keep moving along outside this at a realistic pace. The cast of characters is as rich, detailed, and amusing as always, and the interactions between the characters are great fun.

This novel contains a great collection of references and jokes - particularly to Douglas Adams’ Hitchhiker’s Guide to the Galaxy series - as well as some humour at its own expense, particularly around how the character has come to speak in policese. I’m not sure how well this would work for readers who aren’t familiar with the source material of these references - but then I don’t know whether the Venn diagram of readers will have a large segment of Aaronovitch but not Adams readers.

The one thing that always throws me about this series though continues - a feeling that I’ve missed something. Between each novel it seems that things have been happening to the characters - almost like they have real lives and we are only seeing brief windows in the novels. But this always leaves me feeling slightly confused about some elements and unsure whether they are things I’ve forgotten, or things I’m just meant to infer from the text.

Overall though, another really fantastic novel.