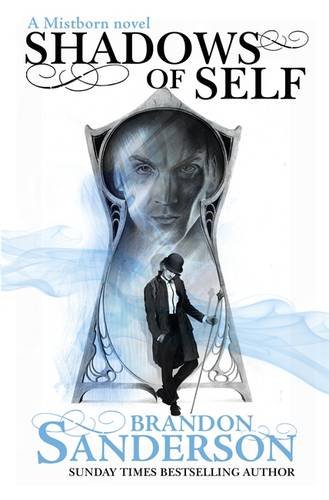 Waxillium Ladrian has returned to the capital city of Elendel from the far flung roughs. Elendel is crisscrossed by canals and railways and towers reach for the sky but this is still a city of dangers and of magic; Allomancy and Feruchemy can still change the world.

The fifth Mistborn novel, and the second in this 'Wild West' era off the world, revisits Wax and Wayne - a pair of amateur lawmen who use their powers to help or hinder the local police force as appropriate. I suspect that the setting is actually later than wild West equivalent, but as a Brit my knowledge of US historical eras is a little limited.

Similarly, my memories of the first Wax book are sketchy, and I had no idea as I read it which mentions of the characters' pasts I was meant to already know and which were new pieces of backstory and exposition that I was being given. That made it a little awkward to follow in places, and I'd recommend that other readers perhaps make sure they revisit the previous book before reading. In fact, I remembered the original trilogy much better and found the many dropped references to it one of the really great things about this book.

The plot this time is well constructed as we follow an investigation, and I thought that the new characters introduced lent the world a new layer of richness and variety. The thing I liked the most though was the way that Sanderson continues to build upon the world he created many books ago to keep it exciting and intriguing - with tons of new material here that really makes the reader think about how this culture has evolved.

Another great from Sanderson then - exactly what I had hoped for and expected. Long may they continue.