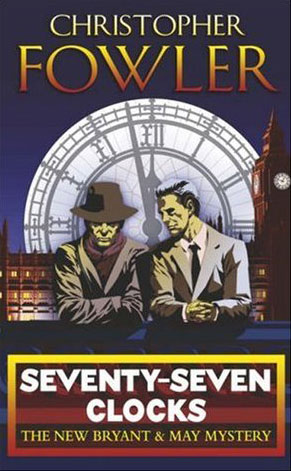 It was late in 1973. As strikes and blackouts ravaged the country during Edward Heath's 'Winter of Discontent', sundry members of a wealthy, aristocratic family were being disposed of in a variety of grotesque ways - by reptile, by bomb, by haircut. As the hours of daylight diminish towards Christmas, Bryant & May, the irascible detectives of London's controversial Peculiar Crimes Unit, know that time is the key - and time is running out for both the family and the police. Their investigations lead them into a hidden world of class conflict, craftsmanship and the secret loyalties of big business. But what have seventy seven ticking clocks to do with it?

The third book in the Bryant & May series of slightly unusual crime investigations spins back to the 1970s and an investigation by the newly formed unit lead by the two detectives. The non-linear ordering of the stories in this series confused me slightly, and I get lost sometimes about which character is which and what I'm meant to know about them.

This time there have been a number of murders and the team are trying to track down the reason and the connection between the deaths in order to prevent more before their boss decides to shut them down. It's actually an interesting story and I found one of the guest characters particularly compelling to read, but there were several aspects which I found slow and repetitive and frustrated me slightly as I read.

Overall I'm a bit unsure of how I feel about the novel. My memory now (several weeks later as I write this) is one of enjoying the book, but I also have a memory of thinking at the time that I wasn't enjoying it and wondering whether I should abandon the series. On balance I'll continue, and see how I feel about book four.