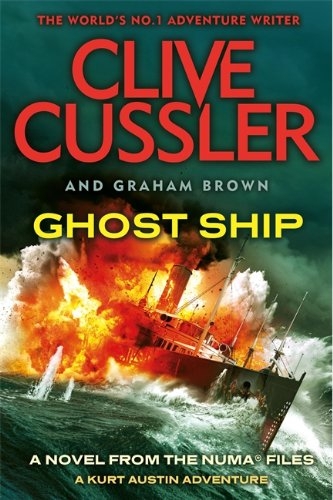 When Kurt Austin is injured while rescuing the passengers and crew of a sinking yacht, he wakes up with conflicting memories of what he saw. Did he witness an old friend and her children drown, or was the yacht abandoned when he came aboard? For reasons he cannot explain - yet - Kurt doesn't trust either version of his recollection.

Ghost Ship is the unoriginal title for the latest in the Kurt Austin / Numa Files series from the Clive Cussler canon, and the fourth penned by Graham Brown. Brown returns the series to the level of his first two, reinvigorating the franchise a little by making the plot more personal, and less contrived-feeling that some of the entries in the set.

We meet Austin as he’s recovering after a failed rescue mission, with a blow to the head having left him confused about what actually happened, and leading him to start digging into a variety of conspiracy theories. It’s a really good setup for the story, and one that piqued my interest from the start. Generally, I found the plot to be a good one - again it’s more of a solo mission though rather than the ensemble piece that the Numa Files series originally seemed intended to be.

There are however a number of criticisms I have of the book - not least the production values that seem to have gone into it. There were multiple spelling mistakes, including the same word being misspelt twice on successive pages, and in one chapter a whole sequence of narrative was repeated in different wording, as if part of an early draft had been left in. The story itself also has issues - the foreshadowing is poor throughout, there are parachronistic memos littering a character’s desk rather than emails - which makes the reader doubt other technological references, one character’s age fluctuates throughout (although I admit one of the references was me misreading, and assuming for much of the book that the character was 15, leading to much confusion), and in one slightly weird passage, characters communicating in morse code choose to be overly verbose, rather than save plot-vital time.

So at the end, I’m in two minds about this book - I liked the story, I liked the characters, but I didn’t think much of the narration or production values.