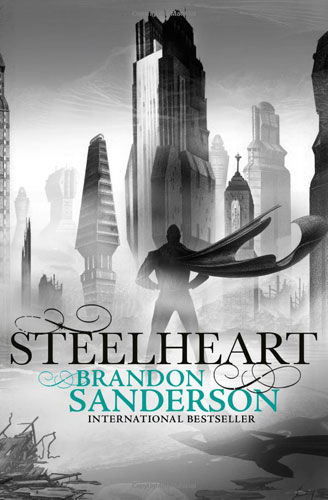 Ten years ago, Calamity came. It was a burst in the sky that gave ordinary men and women extraordinary powers. The awed public started calling them Epics. But Epics are no friend of man. With incredible gifts came the desire to rule. And to rule man you must crush his wills.

Nobody fights the Epics; nobody but the Reckoners. A shadowy group of ordinary humans, they spend their lives studying Epics, finding their weaknesses, and then assassinating them.

And David wants in. He wants Steelheart - the Epic who is said to be invincible. The Epic who killed David's father. For years, like the Reckoners, David's been studying, and planning - and he has something they need. Not an object, but an experience.

In Steelheart, fantasy author extraordinaire Brandon Sanderson tells the tale of David - a young man from Chicago whose father was killed by a human with superpowers, and David is out for revenge.

As usual, Sanderson has created a rich and detailed world, and a magic system to live within it. Unlike most of his stories though, this one doesn't really tell us much about how the magic system works, focussing more on the characters and action.

David is a compelling lead, who we follow on an interesting journey through the novel. Some of the other characters feel rather flat though - the first-person narration not fleshing them out as well at it has in some of the author's other works.

The plot is what really makes this book sing, moving nimbly between action and introspection in a way that compelled me to keep reading. There were plot devices that I could see coming, but also some that took me completely by surprise, and I found the whole tale very enjoyable to read.