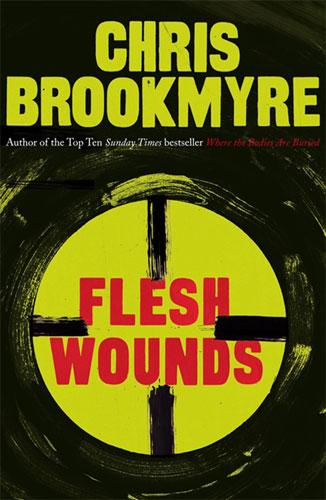 Private investigator Jasmine Sharp's father was murdered before she was born, and her mother went to self-sacrificing lengths in order to shield her from the world in which he moved. Since her mother's death, all she has been able to learn is his first name - and that only through a strange bond she has forged with the man who killed him: Glen Fallan. But when Fallan is arrested for the murder of a criminal her mother knew since childhood, Jasmine is finally forced to enter his domain: a place where violence is a way of life and vengeance spans generations.

Although the plot was solid throughout and the characters interesting, it felt too much like just another crime novel and didn't have the Brookmyre spark that I've come to look forward to.

A large proportion of the story is presented in flashback, as is often the case in Brookmyre's writing, but in this case I found it surprising that there was so much still to learn about characters we've already spent two books with. It felt quite like it was wrapping things up, and that everything we haven't yet learnt was being thrown at the reader rather than drip-fed, and as such seemed like it might be the final entry in the series.

Overall, it was okay, and there were some places that the humorous violence of Brookmyre's earlier work pokes its head through, but I didn't connect with it in quite the same way.