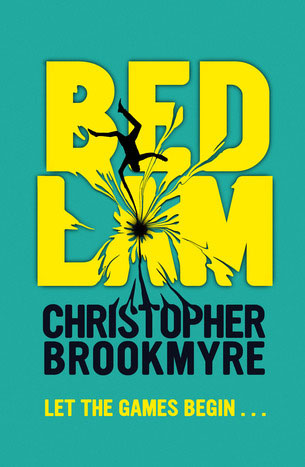 Would it be your ultimate fantasy to enter the world of a video game?

Or would it be your worst nightmare?

Stuck in an endless state of war and chaos where the pain and fear feels real and from which not even death can offer an escape.

Prison or playground. Heaven or hell. This is where you find out. This is white-knuckle action, sprawling adventure, merciless satire and outrageous humour like you've never experienced.

Bedlam sees the return of the Christopher Brookmyre name after a couple of serious crime novels under the abbreviation Chris, and I'd expected that would mean a return to the excellent humour of his earlier novels. Instead I was surprised by what turned out to be a slightly matrix-esque science fiction adventure that still raised a laugh.

Ross volunteers as a guinea pig for an experimental new type of brain scan, but when he wakes up finds he's not in Stirling any more - he's in Starfire, a nineties computer game. As a concept it's fantastic and executed very well, with a good mix of games I'd heard of to add realism and a believable world. Ross is an engaging character who makes a brilliant protagonist and develops well throughout the story.

My one criticism would be that the second half of the story seemed to pass very quickly compared to the first half - but this has been true of some of previous novels and might just be an indication of my being able to read that part of the story more quickly. It did seem that it lost some of the texture later on, and that there was plenty more to explore in the world that Brookmyre had created.

A successful venture into yet another genre for Brookmyre which kept me entertained, though like his 'serious' crime novels not quite up there with the best of his earlier humorous work.