Alcatraz vs the Evil Librarians 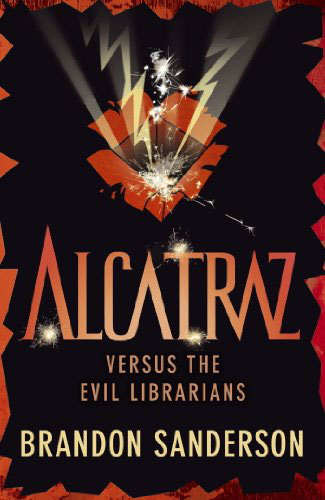 On his thirteenth birthday, Alcatraz - a foster child - gets a bag of sand in the mail which purports to be his 'inheritance' sent from his father and mother. The Librarians, of course, immediately steal the bag of sand from him.

In the first of Alcatraz's adventures, the thirteen-year-old boy receives an unlikely birthday present and is thrust into a world he never knew existed, in which he has special powers with which to battle the evil librarians who vie to control the world.

The style is unique, with the first-person narrative taking a very informal tone, and constantly talking directly to the reader in an irreverent manner. Each chapter begins with what seems like an irrelevant rant, which becomes quite amusing as you learn to expect it.

The plot is quite random and in places felt a little slow, though as I was reading much of it aloud this may have affected my experience of the pace. The magic system is, as usual for Sanderson's writing, detailed and well-thought out, and this along with the sense of humour make the book.

Sanderson proves his flexibility in writing a series for children and once again I find myself wishing that today's kids' books were available when I was younger.

I had planned to re-read the first three Alcatraz stories and finally finish the fourth before book five was published this summer, but messed up the timing and didn't even get back through this, the first. Partly I suspect because my copy of the four books are in a single huge volume that I haven't fancied carrying about in my rucksack.

My memory of the story was somewhat sketchy, and didn't really come back as I was reading, and I didn't feel that the story gripped me sufficiently for it to plant itself fully in my mind again this time. Alcatraz is a young teenager who one day meets his grandfather and discovers that the world is much bigger than he thought and that he is living in a massive librarian-controlled conspiracy.

The plot is straightforward and filled with twists that seem inspired by Douglas Adams, but I don't think that's where Sanderson excels, and to me, reading as an adult, it just seems chaotic and silly. The tone of voice adopted by the narrator comes across as irritating rather than amusing, and it didn't drive me to keep reading.

That said, Sanderson's actual expertise does shine through the gaps - he's an amazing world builder and has once again created a system of magic/fantasy which is compelling and perhaps the most amusing element in the whole of the story. There are hints that the world is much deeper than we've seen so far, and that this will be developed in later stories.