When the Devil Drives 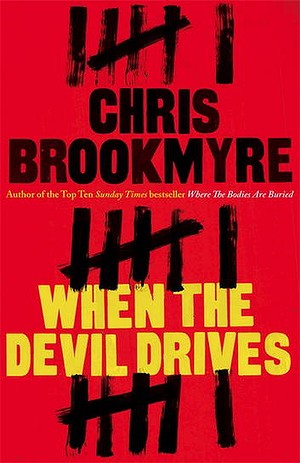 When private investigator Jasmine Sharp is hired to find Tessa Garrion, a young woman who has vanished without trace, it becomes increasingly clear that there are those who want her to stay that way. What begins as a simple search awakens a malevolence that has lain dormant for three decades, putting Jasmine in the crosshairs of those who would stop at nothing to keep their secrets buried.

It's another fun-filled read littered with twists and turns in the plot as each of the investigators works through their clues. Jasmine has grown since her last appearance and as a character steals the show, while Catherine's appearance seems a little weaker and is perhaps slightly more of a supporting act.

There are still a few comic moments that remind of Brookmyre's previous run of thirteen humorous crime novels, but they are fewer than in the previous book and it gives the impression that he is trying to gradually distance his writing from this and transition into more serious storytelling. As a result I didn't find I enjoyed this story quite as much as Where the Bodies are Buried.

Overall though I was won over by the genius of the plot and Brookmyre's talent for misdirection. There was one thing that I thought fairly obvious throughout and was disappointed to find it wasn't a red herring, but plenty more had me baffled. I remain a Brookmyre fan.