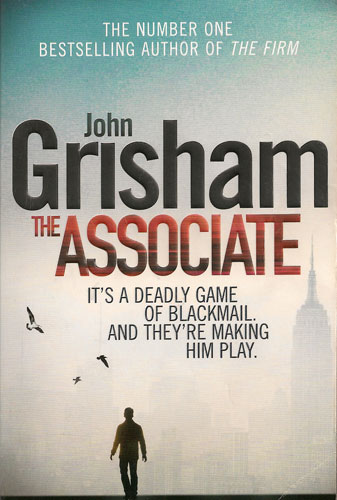 Kyle McAvoy is one of the outstanding legal students of his generation: he's good looking, has a brilliant mind and a glittering future ahead of him. But he has a secret from his past, a secret that threatens to destroy his fledgling career and, possibly, his entire life. One night that secret catches up with him in the form of some bad men in a dark alley. The men make it clear to Kyle that he no longer owns his own future - that he must do as they tell him, or his secret will be made public knowledge, with all the unpleasant consequences.

The associate is very much a return by John Grisham to the style and tone of his earlier novels. It features Kyle McAvoy, a lawyer fresh out of Harvard as he takes up a job in a major law firm, while simultaneously being blackmailed into stealing from them. In a number of ways its very similar to Grisham's very successful early novel 'The Firm'.

I quite like Grisham's style of writing. It's very straightforward and lacking in unnecessarily flowery language. The law, a subject capable of endless confusion, is simply explained to the reader. The story progresses at a good pace and what detours there are from the main plot are simple and don't distract.

This said, the characters do still feel quite flat. The emotions of Kyle, the protagonist, seem oddly muted, and the other characters are lucky to even achieve two dimensions. This doesn't make the book harder to read but it also doesn't endear the characters to the reader - I would have had few qualms about anything bad happening to them.

Grisham's previous books have suffered from one major flaw, which I won't repeat for fear of accusations of spoilers, but although it does feature in this story it's certainly not as bad as it has been - nor as bad as a friend, who read this book several years ago, warned me it would be. Overall, a passable read and probably one of Grisham's better recent outings, despite the level of similarity to what has come before.