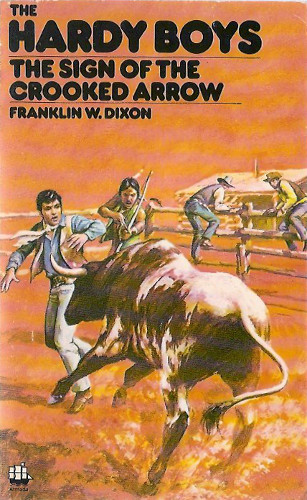 Frank and Joe are catapulted into an extraordinary mystery - and danger from an unknown archer. An urgent summons to Mexico leads to a high-speed plane chase, peril from a mad bull, and torrential floods.

Book twenty-eight sees the Hardy Boys dragged into one of their father’s cases - again. This time they are looking into some jewellery thefts that turn into something almost comically over complicated.

This is one of the worst plots so far - it relies almost entirely on coincidence to draw the teenage detectives into a plot which just happens to involve their own cousin in New Mexico. Nothing in this story seems to involve much detection - and too much of it relies on paying people and guns.

Frankly I was surprised by the amount of gun, violence, gore, and peril. It was not what I expected from a Hardy Boys novel - possibly the weakest in the series so far.