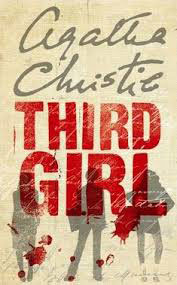 Three single girls shared the same London flat. The first worked as a secretary; the second was an artist; the third, who came to Poirot for help, disappeared convinced she was a murderer. Now there were rumours of revolvers, flick-knives and blood stains. But without hard evidence, it would take all Poirot's tenacity to establish whether the third girl was guilty, innocent, or insane.

I decided to do something different with this Poirot novel. Instead of just read along, get a bit confused between characters, and eventually stumble upon the right answer moments before the big reveal, I would take copious notes, in the form of triples, that would mean I could take in the entire plot, make logical connections, identify contradictions, and come to some sensible conclusions as early as possible.

I started taking notes on my phone's notepad application, then when that proved awkward and slow switched to scribbling longhand notes in a notebook. I managed to keep this up into chapter seven. A week had passed, and I was barely making any progress with the story. Perhaps I was noting down too much - but how did I tell what was important and what wasn't? I gave up on this approach and continued reading in the more traditional manner.

Third Girl has an interesting set up for Poirot, in that it isn't clear at the start of the story if a murder has taken place or not, and much of the narrative is focused on investigations that are different from the usual. Christie once again makes great use of her crime-author character, Ariadne Oliver, to add some fantastic comic moments to the plot and keep the story flowing.

It's another good mystery from the leader in her class. Christie puts together a complex plot, and I just about managed to work out one of the key secrets that came at the end, while many more managed to slip past unnoticed and left me feeling surprised at what I'd missed.