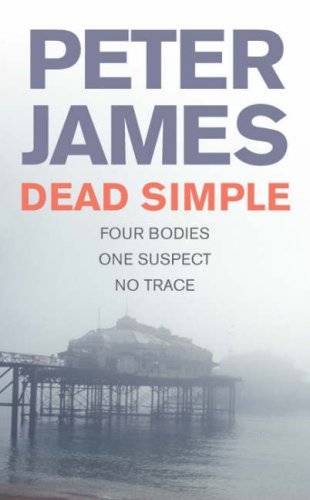 It was meant to be a harmless stag night prank. A few hours later four of his best friends are dead and Michael Harrison has disappeared. With only three days to the wedding, Detective Superintendent Grace - a man haunted by the shadow of his own missing wife - is contacted by Michael's beautiful, distraught fiancée. Grace discovers that the one man who ought to know Harrison's whereabouts is saying nothing. But then he has a lot to gain - more than anyone realizes.

This is the first of Peter James' books that I've read, and I must admit that I was a little aprehensive at first as I'm a little bit off straight crime at the moment having been recently reading humorous crime novels. Detective Superintendent Roy Grace investigates the disappearance of a man on his stag night, during which the other four attendees died.

The book began quite badly in my opinion. It set up the character of Grace well along with quite a large supporting cast, some of whom seem to vanish themselves quite quickly. There's a little too much background detail, which in places breaks the flow of the narrative, and there were a number of elements that put me off the writing style. One was the short chapters. It almost feels more like a script, with the events split into 60 short scenes with cuts between them, and until I got used to them these tended to break the flow a little too.

As the book moved into the middle section though I warmed to it. There were a couple of big twists that I didn't see coming, and I'm not sure if I like that or not - to some extent it made the plot more convoluted and felt as if they were there just to throw the book in a new direction and drag things out a bit longer. The character of Grace (which I found a silly name for a male detective) proved to be quite compelling and not the usual 'broken and bitter' police officer that the early chapters had led me to expect.

My one main problem with this book was the ending, which after a thrilling build-up proved to be anti-climatic. The final chapter in particular annoyed me as it seemed such a cop-out and really out of place in this sort of novel. I could say more but I don't want to give anything away.

Overall, borderline 3 to 4 stars, but probably just good enough that I'll consider having a go at the second book in the series.