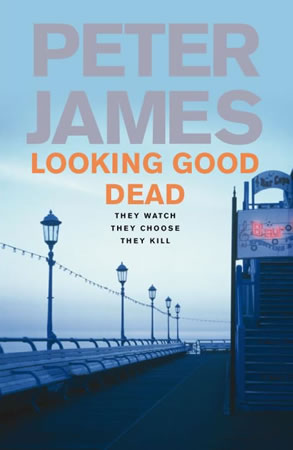 Tom Bryce did what any decent person would do. But within hours of picking up the CD that had been left behind on the train seat next to him, and attempting to return it to its owner, he is the sole witness to a vicious murder. Then his young family are threatened with their lives if he goes to the police. But supported by his wife, Kellie, he bravely makes a statement to the murder enquiry team headed by Detective Superintendent Roy Grace; a man with demons of his own to contend with.

The second Roy Grace novel by Peter James is a big improvement. The prose feels much smoother, the story tighter and the structure more relaxed. Detective Superintendent Grace is called in to investigate when a mutilated torso is discovered in a field, and there's one accidental witness who doesn't know whether to come forward.

Unlike the first novel, the scene is set quickly and we dive into the action of the case. The short chapters provide neat chunks to read without getting bogged down, and the large cast makes for a realistic investigation and help the reader identify more with the characters' world.

The plot is sufficiently dark to make this feel a believable story, and moves forward at a good pace, introducing further peril in good doses throughout. The characters are well-rounded without the text feeling like an extended profile, and the balance of their personal and professional lives was explored in an interesting way and felt important to them rather than just window dressing.

My only criticism would be the number of red herrings given to the reader - for the most part the plot is fairly open to the audience and it is not like reading a whodunit, but in some places there are hints that the detectives don't even find out about that feel a bit like padding. Overall though, a good book that's renewed my interest in reading more-serious crime fiction.