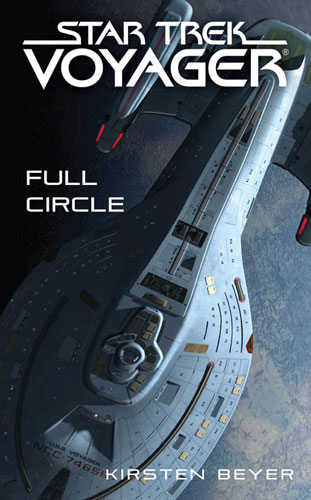 When the U.S.S. Voyager is dispatched on an urgent mission to the planet Kerovi, Captain Chakotay and his first officer, Commander Thomas Paris, must choose between following orders and saving the lives of two of those dearest to them. Voyager's crew must unravel an ancient mystery, placing themselves between two warrior sects battling for the soul of the Klingon people.

A really good continuation novel, the more than does justice to most of the crew of Voyager (Kes and Neelix do not appear). This novel covers much more than the description above, filling the gap from the end of Spirit Walk right up to the Destiny trilogy and beyond, talking account of everything that's happened in between.

Beyer has proved herself to be a fantastic character author, with all the main characters having an arc of their own with some pretty strong emotions flowing.

This actually seems very much like two novels in one, but having now finished I can see that it definitely needed to be one, as the second half probably would offend people if it was published stand-alone, being the more emotionally centred part.

The first half focussed on rounding off the plot threads left hanging from the end of Spirit Walk, and the second half those from Destiny, and setting up the next novel in the series. the next novel is also by Beyer, and I'm looking forward to it already.