A Pocket Full of Lies 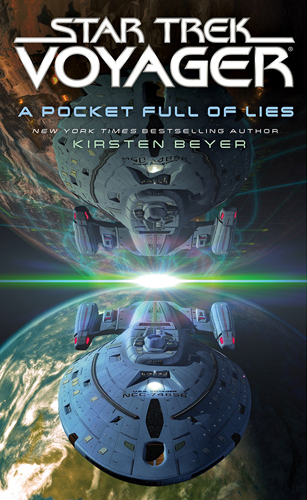 The Full Circle Fleet has resumed its explorations of the Delta Quadrant and former Borg space. Captain Regina Farkas of the USS Vesta makes a promising first contact with the Nihydron - humanoid aliens that are collectors of history. They rarely interact with the species they study but have amassed a large database of numerous races, inhabited planets, and the current geopolitical landscape of a large swath of the quadrant.

When an exchange of data is proposed via a formal meeting, the Nihydron representatives are visibly shaken to be greeted by Admiral Kathyryn Janeway. For almost a hundred years, two local species, the Rilnar and the Zahl, have fought for control of the nearby planet Sormana, with both sides claiming it as their ancestral homeworld. The shocking part is that for the last several years, the Rilnar have been steadily gaining ground, thanks to the tactics of their current commanding officer: a human woman who appears to be none other than Kathryn Janeway herself.

Kirsten Beyer, holder of the Voyager torch for the last few years, provides us with another trip to the delta quadrant to see the crew again. This time it's a stand alone novel that revisits a couple of the alien races met during the TV series. This makes for a nice change after the last few novels which have been a continuing arc.

It's a good story that focuses on the idea of family. While a of of Voyager has that family feel to it, I do think that it's been a bit over done in the books of late, and it really does feel in this story that there's a bit too much focus on this theme this time which seems repetitive.

The story here though is really well constructed from elements of the TV series and some earlier novels, woven together into a main plot that flows nicely, visits a number of spaces, and sees several developments that have potential to lead to more stories in the future.

For the most part, an enjoyable visit to this part of the Trek universe. I still think that some more variety in the authorship would be good for the series, but this one works well.