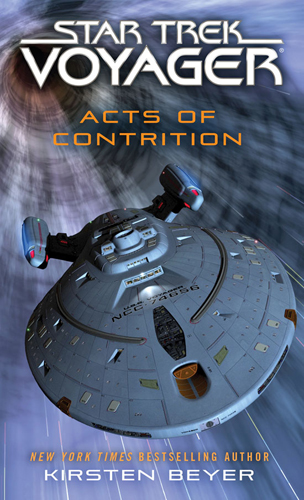 Admiral Kathryn Janeway has now taken command of the Full Circle Fleet. Her first mission: return to the Delta Quadrant and open diplomatic relations with the Confederacy of the Worlds of the First Quadrant, a civilization whose power equals that of the Federation. While awaiting the admiral's arrival, Captain Chakotay knows that he has made certain decisions that could derail the potential alliance. While grateful to the Confederacy Interstellar Fleet for rescuing the Federation starships from an alien armada, the Voyager captain cannot forget the horrors upon which the Confederacy was founded. More troubling, it appears that several of Voyager's old adversaries have formed a separate and unlikely pact that is determined to bring down the Confederacy at all costs. Sins of the past haunt the crew members of the Full Circle Fleet as they attempt to chart a course for the future. Will they learn much too late that some sins can never be forgiven, or forgotten?

The latest novel in the Voyager continuation series follows immediately on from the previous story, 'Protectors'. The 'Full Circle' fleet, including Voyager, are continuing diplomatic relations with a new culture, but far more interesting are the side plots about the characters we know from the TV show.

This is the sixth book in the series that Kirsten Beyer has written, and I'm afraid to say I think it's all got a bit too convoluted to follow properly. I find that I can't remember what's happened well enough to understand the story properly, and it takes me most of the book to set in my mind who each of the new characters are. I think that at some point I'll have to do a full re-read to catch up. It's a shame as this happened before with New Frontier and the first DS9 relaunch, and I'd hoped that the editors might have improved things this time around.

This book is the middle of a three-book story arc, and continues a number of plot lines set up in earlier novels. I found (as always), Beyer's strongest storytelling is in the parts that deal closely with the characters, their families, and their interpersonal relationships. Her action pieces and even the science fiction don't entice me as much. In this novel, the story lines around Tom Paris, Seven of Nine, and The Doctor were particularly interesting, and I wished that far more had been made of these - the 'main' plot felt much more about positioning the pieces ready for the final act in the next book.

I didn't find this book as engaging as I would have liked, and I certainly didn't have an urge to constantly keep reading, but the plot is sound and I have enjoyed revisiting some familiar characters who continue to be written really well. I think that the next book should bring this sequence to a close though and allow for a good new entry point following that, to give new readers a chance to drop in without having to go through the back catalogue.