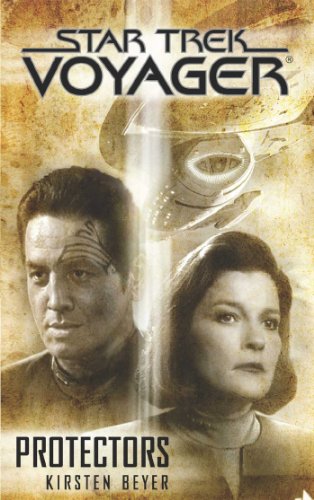 The USS Voyager and USS Demeter set course for a region of the Delta Quadrant far beyond anything previously explored. Captain Chakotay is determined to prove to Starfleet Command that the fleet's ongoing mission is vital to Federation interests, and the key to doing so may lie in a distress call Voyager received nine years earlier, but could not investigate. Meanwhile, Vice Admiral Kathryn Janeway is recalled to the Alpha Quadrant for an evaluation period to determine her next assignment.

It's book four of Kirsten Beyer's re-relaunch of Star Trek Voyager following the events of the series finale, the first relaunch and the complicated inter-twined novels around the Destiny trilogy. Although the authors say that each book can be read alone, there are a lot of references here to previous novels and I think they would be frustrating and baffling to a reader who hadn't been keeping up.

The story feels reminiscent of the author's earlier book Full Circle, with two parallel plot lines following different characters - one more action packed and one more emotional and character driven. The latter was the one that I found most engaging. It's hard to say much about it without dropping spoilers.

The 'main' plot, on Voyager itself, sees the ship investigating a distress signal. There are some interesting science fiction concepts roaming around, but I didn't really feel they were explained in a way that I could really visualise what was happening. The technobabble throughout, but particularly near the beginning, actually distracted me from the plot and felt like it had been picked at random rather than even trying to sound like it was making sense.

The book is meant to be the first part in a trilogy, but as a stand alone I felt there was something missing - it almost subscribes to what I've described before as 'middle-book syndrome', where everything that happens seems to just be reshuffling characters into the place they are wanted for the following book.

Overall though it was enjoyable to visit these characters again and see where they are going next. There's a lot clearly been set up for the future, and if you want to keep reading, then this is a vital book in the series.