Over A Torrent Sea 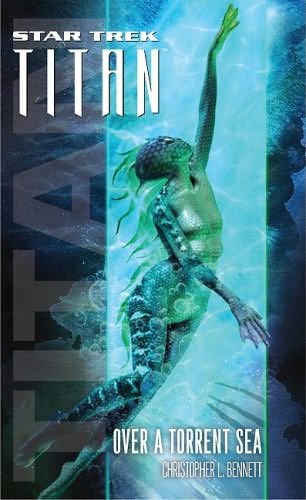 The crew of Titan encounter a planet made almost entirely of water, which Aili Lavena, Titan's aquatic navigator, sets out to chart. But when their good intentions bring calamity to this new world, Lavena and Captain Riker are cut off from the Titan and feared lost. Deanna Troi is left to face a life-changing event without Riker, while the rest of the crew must brave the crushing pressures of the deep ocean to undo the global chaos they have triggered.

Back to normal for the Titan series. Out of touch with starfleet exploring a brand new world with a unique twist. An individual member of the crew finds her calling and is tempted to stay behind permenantly. I've heard this a little before in the Titan series.

Like Bennett's previous Titan novel, this one seemed slow to get started, especially waiting for some of the content revealled in the blurb on the back cover to come along in the plot.

The elements that Bennett was forced to include in the novel from the continuing arc were a bit awkward, and the story he had introduced to get these out of the way seemed very forced and didn't particularly fit.

Overall, it was an okay read, but nothing has yet happened to hook me to the Titan series. I've got a fair while until the next one though. Looking forward to the next TNG book.