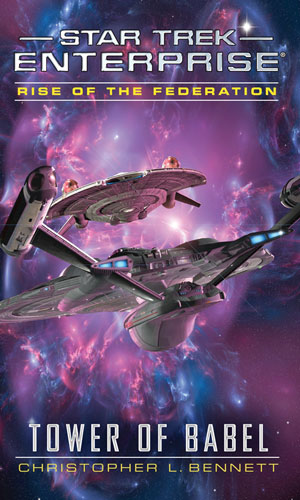 Having survived its first major crisis, the Federation turns to nation-building as Admiral Jonathan Archer works to bring the worlds of the powerful Rigel system into the young union of the United Federation of Planets. But factions both within the Federation and among its enemies oppose the alliance, and Archer will need all the skills of his former Enterprise crewmates to prevent them from plunging Rigel into a system wide war.

The second book in Christopher L Bennett's ongoing Star Trek Enterprise follow-up series is much more of a standalone than the first, which contained a lot of setup of where the characters had got to following the previous novels in the series. Having said that, there's a lot in this book that recurs from the previous and I felt it would probably have been useful had I re-read A Choice of Futures before reading Towel of Babel.

The focus of the story is the potential for Rigel to join the 'fledgling' Federation, and Bennett has built his plot around pulling together the slightly absurdly varied and potentially contradictory facts we've learnt about Rigellians through the Star Trek tv series, movies, novels and comics to date - which as always he does very well, clearly demonstrating that a lot of effort goes into his research process.

I found the plot slightly complex to follow though - there were almost too many things going on, with Bennett trying to give page time to all the main characters. This also had the effect of giving each character only time to show one aspect of their person and some of them felt like they were there just as a nod of the head. A lot of the characters do grow, but I'd have liked a novel which picked one out for a bit of a meatier storyline. I felt Archer's story could in particular have done with a bit more exploration at one point, where he could have gone through a lot more turmoil than he got away with.

Overall I enjoyed this return to the Enterprise universe, but didn't think it was as strong as the first novel in the series, which I absolutely loved. That's not in any way going to stop me from reading the next two that Bennett and the publisher have already announced - these Enterprise novels really do well to put the series on a strong footing.