Rise of the Federation: A Choice of Futures 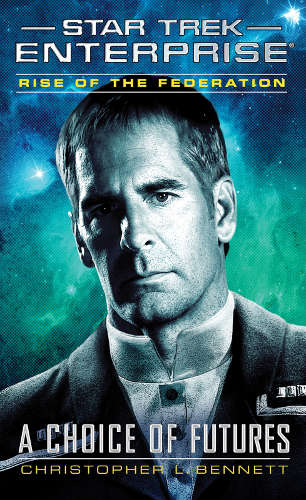 A new nation has risen from the ashes of the Romulan War: the United Federation of Planets, an unprecedented union of diverse species cooperating for the good of all. Admiral Jonathan Archer envisions a vibrant Federation promoting galactic peace and a multispecies Starfleet dedicated to exploring strange new worlds. Yet others within the Federation see its purpose as chiefly military, a united defence against a dangerous galaxy, while some of its neighbours view that military might with suspicion and fear.

When a new threat emerges from a force so alien and hostile that negotiation seems impossible, a group of unaligned worlds asks Starfleet to come to its defence, and the Federation's leaders seize the opportunity to build their reputation as an interstellar power. But Archer fears the conflict is building toward an unnecessary war, potentially taking the young nation down a path it was never meant to follow. Archer and his allies strive to find a better solution, but old foes are working secretly to sabotage their efforts and ensure that the great experiment called the Federation comes to a quick and bloody end.

Christopher L Bennett kicks off the re-relaunch of Star Trek: Enterprise following on from the novels by Michael A Martin, and manages to do a much more entertaining job

Rise of the Federation follows the adventures of the former Enterprise crew, and guest cast, some fifteen years after the TV series was set and shortly after the foundation of the Federation. Admiral Archer is one of the new combined Starfleet's top brass and the others are littered throughout the fleet.

The plot, while spread over quite a period of time, feels unified in a way that previous Enterprise novels have not, and certainly shows that Pocket have chosen the right author to shepherd these characters on. I think I've engaged more with this set of characters here than possibly ever before.

As is typical of Bennett's writing, there is a vast array of references back to various previous episodes in the series and some surprising appearances from the future. His love and detailed knowledge of the series shine through, and this attention to detail go along with his well-paced plot to make this an excellent new adventure.