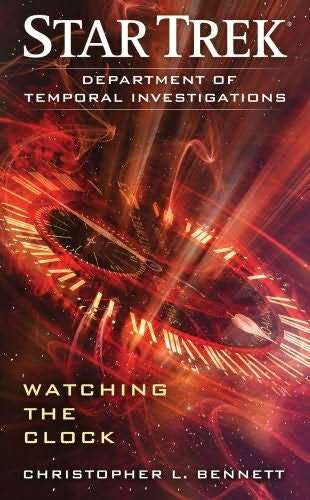 Temporal investigation is a thankless job. While Starfleet explorers get to live the adventure of travelling to other times and realities, it's up to the dedicated agents of the Federation Department of Temporal Investigations to deal with the consequences to the timestream the rest of us have to live in day by day. But in a universe where history as we know it could be wiped out at any moment by time warriors from the future, misused relics of ancient races, or accident-prone starships, only the most disciplined, obsessive, and unimaginative government employees have what it takes to face the existential uncertainty of it all on a daily basis and still stay sane enough to do their jobs. That's where Agents Lucsly and Dulmur come in.

This is the best Star Trek novel I have read for a long time, certainly post-destiny and possibly post-TNG relaunch. Set mainly in the 'Typhon Pact' era, it focuses on Lucsley and Dulmur, and their colleagues at the Department of Temporal Investigations as a new front opens in the temporal cold war.

Bennett packs in a lot of action and adventure, as well as world building, rich detail and characters, and an awful lot of time-travel related physics that is put across amazingly well for what could be a terribly confusing subject.

What's best about this book though is the sheer volume of Star Trek lore that it ties together. Through flashback, the DTI's point-of-view is shown of almost every time-travel incident in TV/film Trek history and a significant number of literary ones too. It really grounds what are fundamentally new characters and new adventures in the familiar and makes the book all the more enjoyable to the fan, and shows off the considerable effort the author has put into researching his subject.

Bennett's certainly making a name for himself in my book as one of the top Trek authors of the current crop and I'm looking forward to his future offerings.