A Snow Ball in Hell 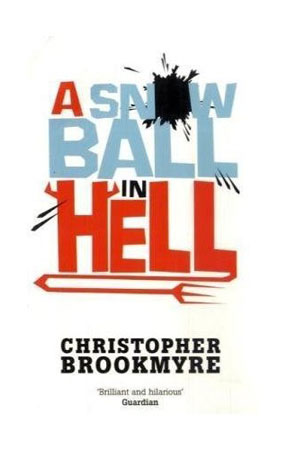 Simon Darcourt is a great deal more successful in his career choice than the average talent show contestant. He's also got the media taped - by the simple expedient of by-passing them completely and posting real-time coverage of his killings on the internet.

Angelique De Xavier, his previous nemesis, is drafted onto the police team trying to bring this one-man celebrity hate-fest to an end. But she can't do it alone, she needs the magical skills of her lover, only she doesn't know where Zal is and meanwhile a whole load of celebs are, literally, dying to be famous.

A Snow Ball in Hell features the return of petite Scots police officer Angelique de Xavia and her previous nemeses Simon Darcourt and Zal Innez. Darcourt has returned from the dead and hatched a macabre plot to kill off celebrities in animaginative and very public manner.

Brookmyre's work is always addictive reading, and this is no exception. The narrative is less Scottish than the author's previous works, making it easier for the uninitiated to follow, and the gruesomeness seems a tad played down, possibly to atop it becoming more of a focal point than the plot. While it is 'black comedy', the humour is not overt and mostly comes from the outlandish nature of Darcourt's plot which you so want to believe could happen.

The text weaves between first and third person narrative in a very natural way, and the twists and turns keep coming. There was one plot twist I saw coming but far more took me by complete surprise. In places the plot is complex and hard to follow, but these intricacies only help to make it so appealing.

This feels like an ending to de Xavia's storyline, which is somewhat disappointing, as I've come to like her character and the others who populate her stories. The characters are all geniuses and working several steps ahead, and it's one of the few stories where I've actually found myself wanting the baddie to win.

This is an example of Brookmyre at his peak, and if you aren't easily offended and don't like reality TV much, I'd recommend it.