A Tale Etched in Blood and Hard Black Pencil 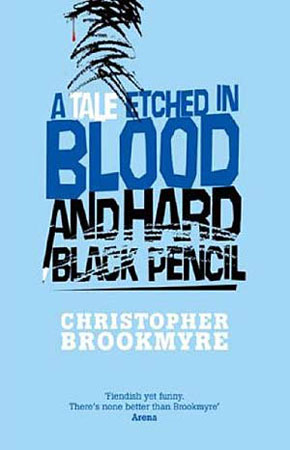 We could tell you about the bodies. We could tell you their names, where they were found, the state they were in. We could tell you about the suspects too, the evidence, the investigators; join a few dots, even throw you a motive. But what would be the point? You're going to make your own assumptions anyway. After all, you know these people, don't you? You went to school with them. We all did. Granted, that was twenty years ago, but how much does anybody really change? Exactly. So if you really knew them then, you'll already have all the answers. If you really knew them then...

This book is a stylistic departure from Brookmyre, and I can't say I found it as enjoyable as his previous novel. When two bodies are found it's up to Detective Superintendent Karen Gillespie to investigate, but everyone the case throws up seems to be one of her former schoolmates.

I've noted previously that one of Brookmyre's strengths is building up the backstories of his characters, sometimes to the extent of almost the entire first half of a novel being backstory, but in this novel the backstory is almost the whole thing. The odd scene set in the present are set around chapters and chapters following the school-life of the characters, and it is indeed this that forms the truly interesting element of the plot - the crime serving as little more than framing.

It's a different tactic, and though Brookmyre pulls it off well it feels a little cheapened by what purports to being the main plot actually being quite thin. The characters themselves are varied and interesting, though hard to follow sometimes as their nicknames change, and the setting requires a little more suspension of disbelief than usual - for some reason I find the adventures of an adult Jack Parlabane in his other novels more believable than the mundane but overly-violent day-to-day life of a group of school children.

Overall only a middling book - an interesting and well executed concept, but not one that gripped me nor, this being labelled a comedy novel, made me laugh very much.