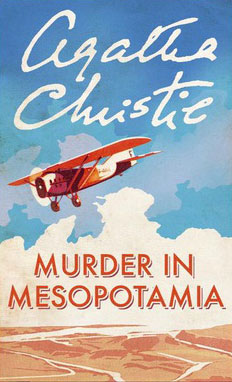 It was clear to Amy Leatheran that something sinister was going on at the Hassanieh dig in Iraq; something associated with the presence of 'Lovely Louise', wife of celebrated archaeologist Dr Leidner. In a few days' time Hercule Poirot was due to drop in at the excavation site. But with Louise suffering from terrifying hallucinations, and tension within the group becoming almost unbearable, Poirot might just be too late.

This is a really refreshing different setting for a Hercule Poirot novel, set as it is at an archaeological dig, where the wife of the dig leader is found murdered. The book is narrated by one of the characters close to the events, the victim's nurse, and tells the story of her time at the dig and helping Poirot in his investigations.

It's certainly one of the most engaging of the series that I've read recently, and I think it's just the new setting that makes this difference. The cast of characters is as usual quite large and all of them are potential suspects - I must confess that I fell for some of the blatant red herrings and didn't see the solution coming.

Poirot is left a bit of a mystery himself in this - the narrator is not familiar with him or his ways and so his appearance is quite limited to selected scenes, and it seems a little coincidental that he is there at all. I feel that it would have worked without his inclusion with one of the other characters taking the lead investigative role. Generally my feeling is that a book in a series should justify itself as being a story that could not be told if it were not, and this novel fails that test.

However I did enjoy it, and feel that at this point in the Christie canon things seem to be picking up after a bit of a dry patch. Looking forward to reading more.