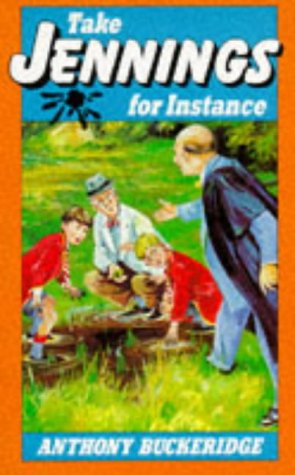 Mr Carter has said that the jar of tadpoles could be kept on the common-room window sill: it was when they hatched out into frogs that the trouble really began.

According to the long-suffering Mr Wilkins, Jennings was at the bottom of a lot of the trouble at the school. But as the much misunderstood eleven-year-old said, "You never know where you are with grown-ups, do you!"

Take Jennings for Instance is a fairly run of the mill entry in the series. It's not laugh-out-loud funny, but it's equally not overly predictable and refuses to rely on the frequent set-up of an out-of-the-box misunderstanding to set up the plot.

The third-formers at Linbury Court have set up a Natural History club, and Jennings is keen to build up a collection of tadpoles. This serves as a backbone for the book, tying together several distinct adventures.

It's a good story, which led me to wonder why it's one that I don't really remember from when I read the Jennings novels as a child, however this was quite nice as I wasn't aware of what was coming up.

As with most of the Jennings books, there's nothing really to date them, and I really do wonder why they seem to be out of favour at the moment with booksellers/readers. I enjoyed them as a child and am enjoying them again now.