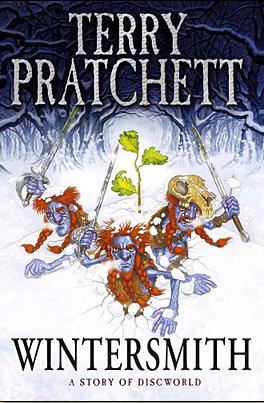 When Tiffany Aching - young witch - steps into a dance she shouldn't, the spirit of winter falls in love with her. He gives her roses and icebergs, says it with avalanches and showers her with snowflakes - and suddenly winter is all around her. All the time.

Another fantastic adventure from Mr Pratchett, following his theme of basing these so called 'youger-reader' books on popular mythology this one loosly follows the idea of Orpheus in the Underworld... but soon grows into the glorious style of Discworld genius.

It's a little slow to get started, and perhaps this is why one of the final chapters has been moved to the front as a sort of prologue - just to tease the reader and let them know there's something coming. The early chapters (and boy the chapters are long at the start) deal with updating us on Tiffany's life and situation since the last book, before we get into the meat of this one.

Once the opening has passed however we're back into the usual Pratchett flow of narritivium which is unputdownable, and I charged through this book in just three days-worth of train journeys, but then it is built for children so is probably shorter (and has a larger font) than the majority of the Discworlds.

After finishing this there's only one thing that concerns me: I've only got one more Discworld novel left before I've read them all.